Last month I released a short story on Kindle called, The Cucumber Man. It is a fun little dark comedy/horror story that I wrote for a laugh with a few friends.

Check it out, it'll only take you 10 minutes to read and it is only 99p (or your country's equivalent) on Kindle, and please leave a review on Amazon and Goodreads when done.

I can't wait to hear your thoughts on it..:) 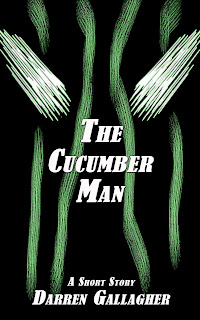 So September has ended and I just want to share with you all that happened in my little author world.

Writing:
Once again another month has passed and the words still elude me. This month I tried to start writing a new novel and only managed to write a measly 1,604 words. I really don't know what has happened with my writing. I remember a time when 1,604 words were a warm up!

Hopefully October will bring new life to my fingers.

Books:
This month I decide to start back and try to do the whole "marketing" thing again.

First off, I dropped Love's Curse to 99p in every market on Amazon kindle. Get your copy here US UK

Then I contact reviewers on Instagram and a few different blogs to see if they would review Aybss.

Here are a list of reviewers that reviewed the book:
Hannah May Book Reviews (reviewed in August) gave Abyss 3 Stars. Here is her review.

My friend also sent Noelle Kelly a review copy back in May. She gave Abyss 4 Stars. Here is her review.

Abyss is currently with more reviewers and I expect to get a few more reviews this month! Any book reviewers out there reading this, get in touch!

Reading:
In terms or reading this month, I had a really good one! Best one all year!

I won a copy of A.J. Finn's novel, The Woman in the Window. Honestly I wasn't that impressed by it. It was just another over hyped book.

Then I read, Prince of Thorns by Mark Lawrence. Man that book was so good that I dived straight into the sequel, King of Thorns. Thankfully I got Emperor of Thorns a week after finishing King and I am currently half way through the book. The trilogy was bought to me as a gift and I am truly grateful for them! Such an amazing trilogy!!! and I encourage everyone who reads this to go out and buy them straight away!!

I had started reading The Father of Lies by S.E. England, but when I got Emperor I dropped it, I shall finish it this month.

I also finished reading Sparkles of Blue: Sleeper Chronicles by Ray Zdan. I came across an Instagram advert saying free PDF download of the book, so I did as the cover art was pretty cool. The book didn't work for me... It had great promise but it wasn't executed nearly as well as it could have been.

Planing on reading another few this month. Way behind on my Goodreads challenge for the year so need to catch up.

Saying as the evenings are getting shorter, the nights are getting longer, colder and wetter, and all's we want to do is lay in front of the fire reading a good book...

Well I thought I'd be nice to you all and I've dropped the price of Love's Curse to 99p on Kindle.

What better way to spend your dark evenings than lying up reading how Ireland would look if a Zombie Apocalypse ever happened.

So, don't delay... Click the link below and enjoy!
Kindle US    Kindle UK 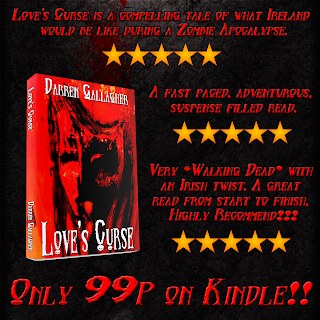 So, since I last check in with you all I've published my third book, Abyss, back in April this year. Abyss is also my second collection of short stories. (you can find the first here...) 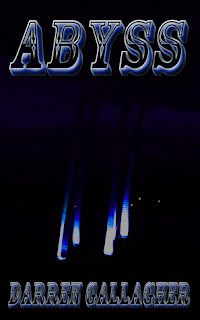 The Abyss is there, right in front of us.

We all see it but no one dares approach. We are afraid of what is in there, afraid of what will happen when we cross that barrier and enter the world unknown.

Within these pages are stories of people that have crossed into the Abyss. Some of them regretting it as soon as they did... Others, not living long enough to realise their error.

A city swallowed by darkness, a private country club that holds a terrible secret, a lonely musician and an unwanted guest are just some of the horrors that await you.

Come, dive in and enjoy all the wonders of the Abyss... If you are.

Get your copy now!
Amazon US   Kindle
Amazon UK   Kindle

And don't forget to add it to your reading list on Goodreads!

Sorry I've been MIA for a long time, but I'm back again and this time I've brought with me my brand new podcast. Every Tuesday I will be bringing you one of my stories in audio form. The Podcast will be available on soundcloud at https://soundcloud.com/themidnightchill and also on Youtube at https://www.youtube.com/user/dubhdara

I hope you guys will give it a listen, and maybe even a like or subscription. And don't forget to let me know your thoughts.

This is just my way of promoting my work. I've never been the best at facebook, twitter or instagram but I think with this I can reach a wider audience.

But anyway, without further ado, here is episode 5 of The Midnight Chill. You can find the others either in the links or the button above.

So sit back, relax and enjoy The Midnight Chill.

I'm delighted to announce that as of May 19th 2015 Strings is once again on sale.

It has been upgraded with a brand new cover, and the interior is now professional standard!

But why not see for yourselves...:)

Here are the links where you can buy your copy, and please leave a review once you have experienced all the pleasures(or horrors) Strings has to offer...:) 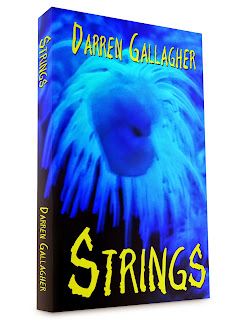 Read Me a Story Blog Hop

Hi everyone, and thank you for coming to my little corner of the web!

I'd like to share with you the first part of my short story "Red Alert" from my first book "STRINGS".
Strings is a collection of horror short stories,and was only published there last month.


I hope you enjoyed it, and if you'd like to read the rest, Strings is available on Amazon US and Amazon UK

Thanks again for taking the time to read my work, and I hope you enjoyed it.

Hola folks, Last month I released a short story on Kindle called, The Cucumber Man. It is a fun little dark comedy/horror story that I wro...

Darren Gallagher
I am a writer of all things supernatural, and some things not. In September '08 I decided I wanted to pursue my dream of becoming a writer. Since then I have gotten a Diploma in Creative Writing from Kilroys College in Dublin. I struggled to find a home for my stories until August 2010. Since then I've had around 70 stories accepted for publication from small presses such as; Pill Hill Press, Wicked East Press, and Static Movement. My first collection of short stories "Strings" is currently on sale, and my short novel Love's Curse is set for release late May 2015. I am determined to continue with achieving my dream and hopefully entertain you while I do. Thank you everyone, and I hope you enjoy my work.

Promote Your Page Too

Find My Books On Amazon